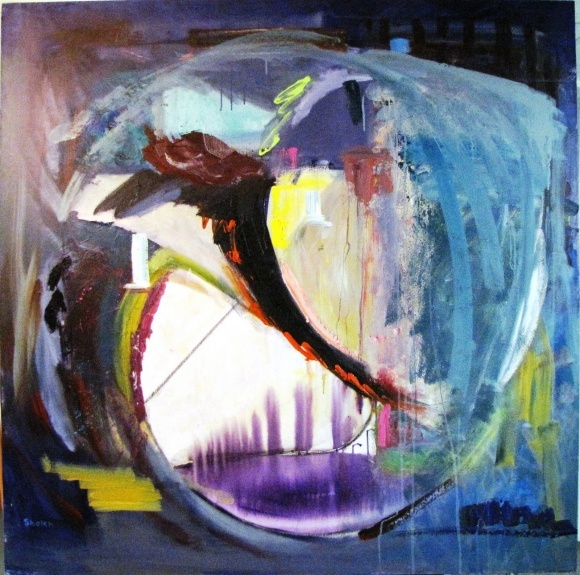 NEW CANAAN, Conn. (April 30, 2010) – Sholeh Janati’s provocatively titled abstract, “The District of Sex and Finance,” was selected for the 61st Art of the Northeast (“AONE”), one of the country’s most highly respected annual juried competitions.

The show opened on April 30, 2010 and ran at the Silvermine Guild Arts Center in New Canaan, CT through June 11. This year’s event was juried by Katie Rashid, Director of the Jack Shainman Gallery in New York.

The show draws entries from artists throughout New England, New York, New Jersey and Pennsylvania and is recognized as one of the most fiercely competitive exhibitions. According to the Guild, the competition traditionally draws over 1,200 entries.

Of those submissions, a total of 64 works by 47 artists were accepted to the exhibition, including Sholeh’s “Sex and Finance.”

Throughout its history, Art of the Northeast has been a platform for both established and emerging artists, many of whom have gone on to receive national acclaim. A press release from the Guild stated, “The selection made for this year’s AoNE sheds light on the diversity of the submissions and work being made in the region. Some of the overarching themes that emerged through Ms. Rashid’s selection are an interest in craft, abstraction, surrealism, and an interest in the figure. There are also performative and political undercurrents running through the exhibition.”

Silvermine Guild Arts Center is located in New Canaan and is one of the oldest artist communities in the United States. Its nationally renowned artist guild, award winning gallery and school of art offer more than twenty contemporary and historic exhibitions annually on its four-acre campus.

UPSIZE “District of Sex and Finance”